Meet The Self Made Millionaire Forex Trader & Mentor, Clint Fester

CALIFORNIA CITY, CA / ACCESSWIRE / June 18, 2020 / Clint Fester is a 35-year-old forex mentor and the CEO of FestX Pty Ltd; A forex education program that has over 2000+ students worldwide.

Recently, we had an interview with Clint and during the conversation, he disclosed the reasons why he became a forex trader and some tips for anyone aiming for success in life.

The Journey To Success

When asked what his motive to join the forex industry was, Clint pointed out the need to satisfy his inquisitive mindset. It all started back in 2015 when Clint ventured into the network marketing industry. About a year into his network marketing journey, Clint found himself standing at a presentation meeting, and during the course of the meeting, he noticed some attendees looking at what looked like a Tetris Video game on their mobile phone screens.

This was in fact Metatrader 4, which is a trading application used by 90% of forex traders. He asked them about it and they explained how they made $150- $300 daily from Forex. This piqued Clint’s interest. Later that day, Clint spent hours on Youtube Researching Forex. Sometime later, Clint stumbled upon individuals in the U.K and U.S.A who gave a whole new meaning to forex. 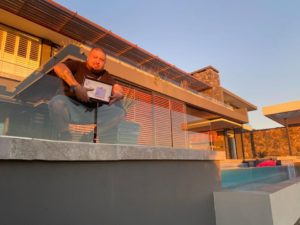 These were guys who built houses, drove expensive cars, and had happy lives by leveraging forex. This was mind-blowing to Clint as no one in his country South Africa had used Forex to reach these levels of success before. As a matter of fact, most people in South Africa were still skeptical about the whole forex trading thing back in 2015/2016 and thought it was a huge scam.

Clint explains that he didn’t let this deter him and he pushed on further. He left the network marketing industry and decided to take the road less traveled: the forex industry. Overcoming Newbie Obstacles

In order to earn a living from forex, Clint had to spend days learning the ropes. It wasn’t easy as the forex trading industry is a dog eat dog world. His only beacon of hope was the unprecedented success other forex traders had.

Clint understood that the path he chose would be worth it if he put on the required effort. In 2017, Clint started using the social media platform Instagram and he decided to post a “before” picture of a specific currency pair. His plan was to predict the movement and post the “after” picture once his predictions were correct. And he did that!

A few days later, various individuals began sending him direct messages asking if he could mentor them on the art of forex trading. He accepted their offer and started out with the help of a few friends. Eventually, he had to hire more people to help him out and he rented out conference rooms because the crowd got bigger by the day.

Clint has achieved success in the forex trading industry and today he’s a mentor to over 2000 students worldwide.

How Did Clint Achieve This Level Of Success? Below clint shares a few success tips that he thinks will be beneficial to every forex trader out there;

” I have a saying, Trade what you see not what you feel. Now that small tip can save any trader thousands of dollars if applied correctly. You see a lot of traders try to pick and choose the bottoms and the tops in the markets and base their buys and sells off what they think or feel where if they just traded what they saw things would be easier. ” says Clint

He further shares, ” Don’t look left or right, Look towards the ends of your wrist if you looking for a helping hand, use them! LIFE doesn’t stand on the corner waiting for you to walk by to give you a handout.

There’s no such thing as handouts in this life. Get to work and wake up before the rest of your friends and make sure you have a 2-4 hour lead on the rest of the world. Do this for 3-5 years and you will start reaping the rewards.”